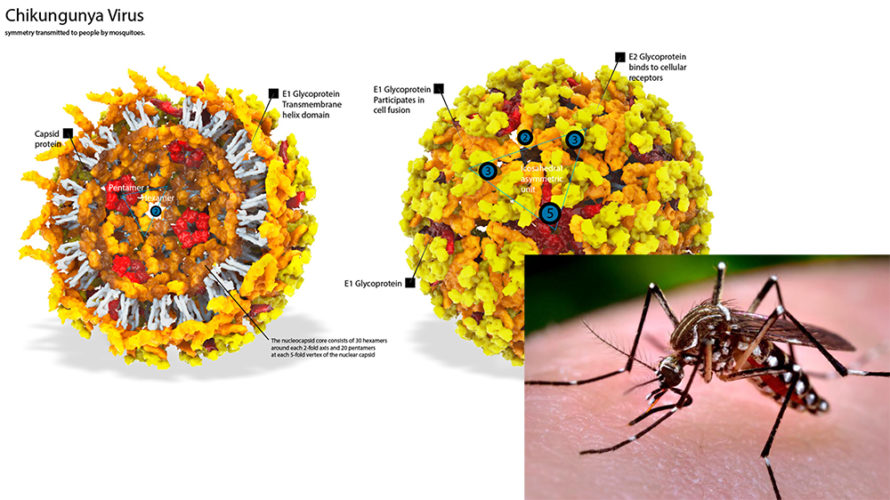 There are no specific treatments or vaccines for chikungunya and related viruses, known as arthritogenic alphaviruses, according to researchers and added that doctors simply recommend rest, fluids and over-the-counter pain relievers such as acetaminophen or ibuprofen.

WASHINGTON: Scientists have identified the molecular handle that chikungunya grabs to get inside cells, an advance that could lead to ways to prevent or treat diseases caused by the virus.

The handle, or receptor, is located on cells that build cartilage, muscle, and bone. Joints are filled with such cells, which help explain a patient’s painful symptoms, according to the findings published in the journal Nature.

By creating decoy handles, the researchers at Washington University School of Medicine in the US showed that they could reduce chikungunya infection and signs of arthritis.

“We now know how chikungunya gets into cells, and we may have found a way to block the infection,” said Michael S Diamond, a professor at Washington University School of Medicine.

“If the virus cannot get into the cell, it is unable to replicate and cause infection and disease,” Diamond said.

There are no specific treatments or vaccines for chikungunya and related viruses, known as arthritogenic alphaviruses, according to researchers.

Doctors simply recommend rest, fluids, and over-the-counter pain relievers such as acetaminophen or ibuprofen, they said.

Diamond and colleagues identified the protein on cells that the chikungunya virus latches onto.

The protein is called Mxra8, and it is needed for chikungunya to invade both human and mouse cells, the researchers found.

Additional experiments showed that not just chikungunya but its arthritis-causing relatives – Mayaro, Ross River, O’nyongnyong, and Barmah Forest viruses – require the protein to get into cells.

Since chikungunya uses Mxra8 protein as a handle to open a door into cells, the researchers tested whether preventing the virus from grabbing that handle could reduce infection.

They deluged the virus with decoy handles, reasoning that chikungunya would grab the decoy and be locked out of cells.

Only a few individual viruses that lucked onto a true handle could infect cells, so the overall infection rate – and signs of arthritis – would fall, researchers said.

A day after infection, the level of virus in the mice’s ankles and calf muscles was between tenfold and a hundredfold lower in the animals that had been treated with Mxra8 proteins or blocking antibodies than in those that received a placebo, and the numbers remained lower over the next two days.

In addition, three days after treatment, the mice that had received the protein exhibited much less swelling in their ankles than those that received the placebo.

The results suggest that a compound that blocks the virus from attaching to Mxra8 on the surface of cells could prevent or reduce arthritis.

Vridhi Pain Relief Oil is the product introduced by RANBASS. It gives relief to the parts of the body wherever applied. This Pain Oil is a SPECIALIST for any kind of JOINTs Pain, Knee Pain, Muscle Pain or any other. The Oil gives relief from any kind of Pain which may be from 1 day or 1 year or 10 years.

Sign in Create an Account
Lost your password?
Cart
Checkout - ₹0.00
Select the fields to be shown. Others will be hidden. Drag and drop to rearrange the order.
Click outside to hide the comparison bar
Compare
Compare ×
Let's Compare! Continue shopping